In the wake of the financial crisis of 2008, financial institutions increasingly turned to ‘de-risking’ – exiting relationships and limiting interaction with clients deemed high-risk – as a way to reduce their exposure.

In a recent Banking Circle webinar, Mitch Trehan, Head of Compliance and MLRO at Banking Circle, was joined by Philip Doyle, Group Director, Financial Crime, at Revolut, to discuss the de-risking of PSPs in the industry.

Moderated by Esther Groen, an adviser to Holland FinTech and an Executive Board member of the European Women Payments Network, Mitch and Philip discussed the changing regulatory landscape, how tech-driven challengers are impacting the way risk is managed, what’s next for the payments industry, and more.

You can watch the webinar on demand here, or read on for our summary of the key takeaways from the event. 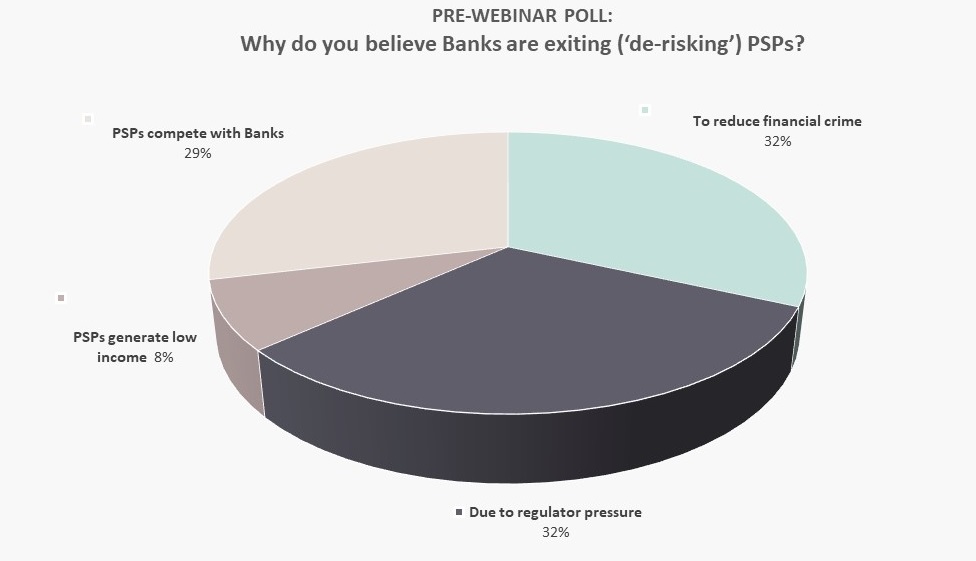 De-risking: What was the catalyst?

Post-2008 financial crisis, a distinct change in the political climate meant that Banks came under scrutiny from regulators over how they managed their risk. In the years that followed, a number of major players – including HSBC and Barclays – underwent significant de-risking programmes, explained Mitch Trehan, Head of Compliance and MLRO at Banking Circle.

That activity triggered something of a chain reaction across the industry, as Banks responded to the pressure from regulators: “Banks are businesses, not charities, after all. Shareholder value and protecting themselves started coming first,” Mitch commented. This widespread de-risking had significant consequences, leaving some customers without access to the financial system.

Many of the correspondent Banks across the industry today are incumbent in their nature, explained Philip Doyle, Group Director, Financial Crime, at Revolut. “This means that their management and monitoring of risk, and their ability to fulfil their own obligations as regulated entities, is made quite difficult by the technology stack that they have, as well as their policies and strategies,” he said.

Those banks with the ability to build a technology stack that allows them to monitor each customer at an entity-level – rather than at a segment-level – are far more likely to be able to identify bad actors on their books. “You can also, therefore, reward good actors – the PSPs and EMIs that have their stuff together,” Philip said.

Break down silos to futureproof

Organisations with a greater focus on technology may have an edge when it comes to managing risk effectively, according to Mitch Trehan. “In tech-driven firms, you need fewer people because the tech is doing a lot of the work,” he explained. As a result, it’s much easier to break down the silos that can often hinder incumbents. “This has a huge impact on how banks work, and helps risk and fraud to be less fragmented in the organisation.”

Faced with the pace of change in the industry today, having the right infrastructure and technology in place is becoming more important than ever – which raises questions as to how incumbents can keep up with challengers not held back by legacy systems.

“Things are evolving, new ecosystems are emerging at a rate of knots, and the number of transactions that people are seeing is expected to go up exponentially – and already is,” commented Mitch. “Is that beyond what banks’ infrastructures can currently process? Only time will tell. But banks across the board are investing in new infrastructures and better technology.”

You can watch the full webinar on demand here.

Stay in the know

Sign up to our newsletter today to receive our exclusive industry insights and be informed of our latest product releases.

MiCA regulation: What does it mean for crypto?